I have written and published three eBooks about my world adventures.

Seeing a Slice of Southern Africa My Way

Seeing The World My Way

Seeing The Americas My Way

My eBooks are travel biographies of the observations and experiences of a totally blind and partially deaf man as he travels independently around the world having exciting adventures. The most recent volume, Seeing a Slice of Southern Africa My Way, published 31 December 2020, is a journey of continued self-discovery as I plot my way from multi-cultural South Africa with its complex society, to Malawi, with its picturesque and peaceful nature. This third book takes the reader through parts of Southern Africa, and offers a brief glimpse into a little of Lesotho, Swaziland, Mozambique, Zambia and Zimbabwe.

I’m now in Mérida, in the Andes, still in Venezuela. I arrived this morning, 28th November. Now, where did I leave my last travel story… I was in Guyana, I think. Georgetown, British Guyana’s capital is a nice enough city, very hot and dry in the day. It is on the coast and it’s possible to walk through the city passing all the historical and government building as you lazily stroll down to the sea wall. Read more →

Read Tony’s latest blog post about his travels in Guyana and Venezuela here.

I’m about to take a night bus to Coro on the north coast of Venezuela. I should be in Coro sometime tomorrow afternoon. 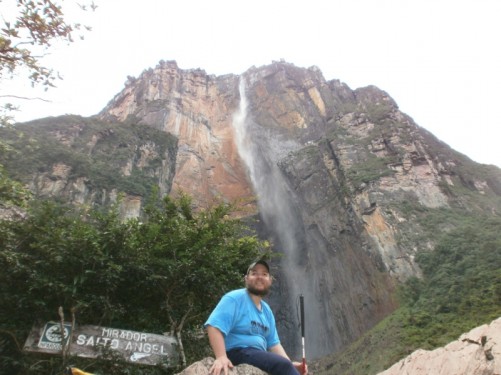 Tony at the Angel Falls view point after hiking and climbing 750 metres accompanied by a local guide. This the world’s highest waterfall. It is at present about 75 percent full as it is the dry season in Venezuela. Taken on the evening of 23rd November.

I am now in Annai, an Amerindian village in the middle of British Guyana. I am staying at a wonderful eco-lodge named Rock View Lodge. I leave early tomorrow morning and head to Boa Vista, Brazil. More about Rock View and its wonderful people and nature to follow later.

I’m at present in Georgetown, capital of Guyana, in the north part of South America. It’s on the Atlantic Ocean. I’ve been travelling for two weeks having set off on 1st November. I’ve visited Paramaribo, capital of Suriname, and also visited a couple of jungle villages in the rainforest. I then headed to Cayenne, capital of French Guiana.

I am couch surfing around and using public buses/shared mini-buses. It’s good fun, people are kind and friendly. It’s very hot. I touched spiders webs, maggots, termites, and many different plants and trees in the rainforest. I visited both a Maroon village, people from former slaves who ran away into the jungle, and a Amer-indian village deeper in the forest. The Maroon people are friendly and sociable, the Amer-Indians are less so and more shy. French Guiana was difficult, as there less English is spoken, and Cayenne has no real centre. I visited a Sloth animal sanctuary, where I held a sloth! Their fur feels like a cat’s. They cling to you and are as heavy as a human baby!

Georgetown is extremely hot. I’ve not explored yet, but spent most of the day in the National Centre for disabilities. The people are most friendly and kind. I next head into Guyana’s interior to a lodge near Annai village. Later I go to Brazil.

I’ve just done my 13th bungee Jump! Sunday 7th October, off the Transporter bridge, Middlesbrough, northeast England. I jumpt with UK Bungee Club and it was great fun! 160 feet, 50 metres! I stood on the edge and the energy flowed through me then I jumpt – electric! My first bungee in 4 years and I can’t wait to do something else similar. The more adrenalyn the better! See photos on my facebook Next off to Berlin.

I began in Zurich, Switzerland’s largest city, where I spent 4 days-3 nights walking its cobbled streets listening to its many fountains and soaking up its relaxed friendly atmosphere. Naturally I spent time walking around part of Lake Zurich and was even lucky enough to take a boat ride on the lake one evening on a chance meeting with a Swiss lady who enquired upon where I wished to go.