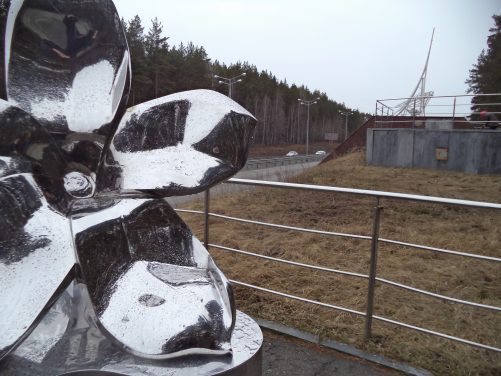 A large metal flower. An artwork near a monument at the dividing line between Europe and Asia, some 17 km west of Yekaterinburg. It stands next to a motorway with a pine forest in view on the far side. 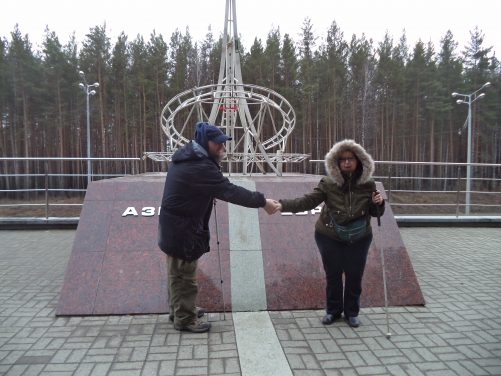 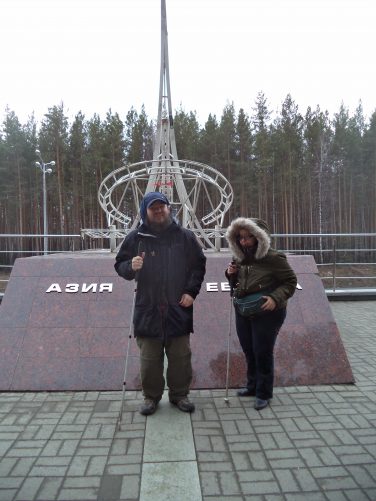 Again at the dividing line monument. Tony standing across the line – half in Europe and half in Asia. 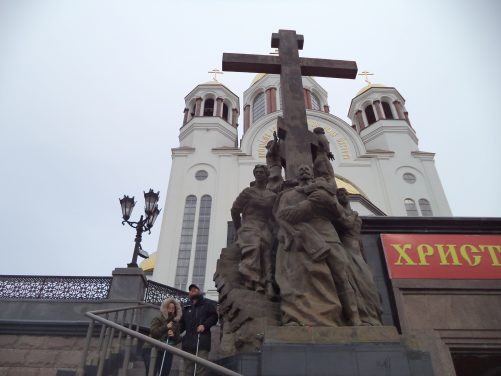 Tony and Tatiana outside the Church on Blood in the centre of Yekaterinburg. This Russian Orthodox church stands on the site of Ipatiev House where Nicholas II, the last Emperor of Russia, and his family were shot by the Bolsheviks in 1918. The church’s full name is the Church on Blood in Honour of All Saints Resplendent in the Russian Land. 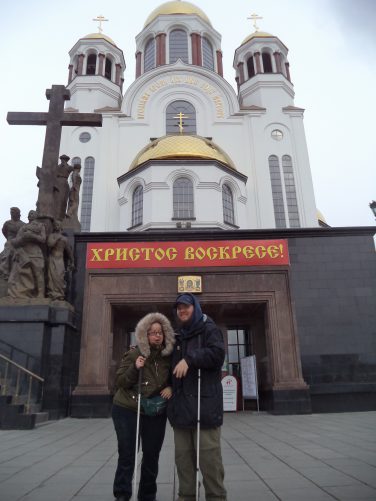 Tony and Tatiana outside an entrance to the church. The church is painted white with gold domes on the roof. Construction of the church began in 2000 and it was consecrated in 2003. 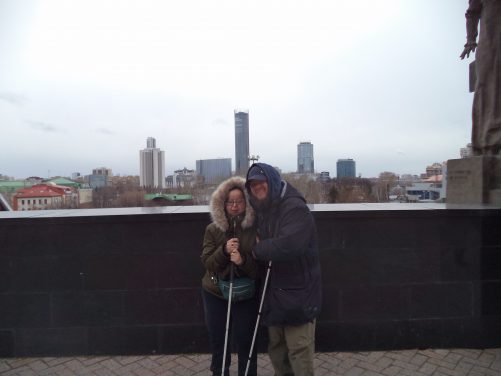 View of central Yekaterinburg from outside the Church on Blood. Tatiana and Tony in the foreground. 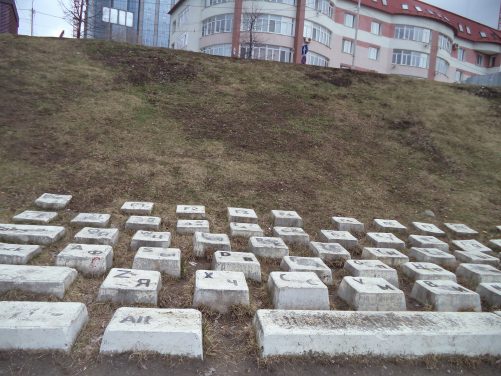 A giant computer keyboard made out of concrete blocks on a grassy embankment by the Iset River. This sculpture was constructed by artist Anatoly Vyatkin in 2005. It has 104 keys with the regular ones weighing 180 pounds each, while the space bar weighs 1,000 pounds. 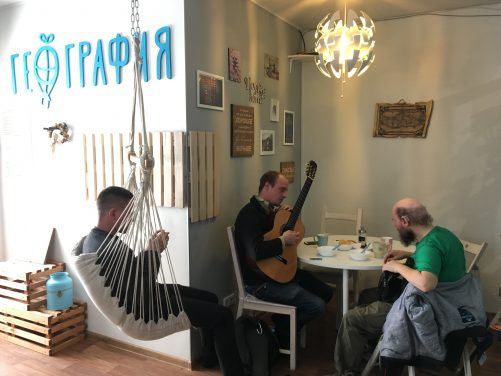 Tony sitting at a table in the kitchen in Geo Hostel with a local guy named Sergy. He’s holding and playing a guitar. Another guy is sitting in a hammock seat. He is a traveller from the US. Bowls and cups on the table, the products of breakfast. 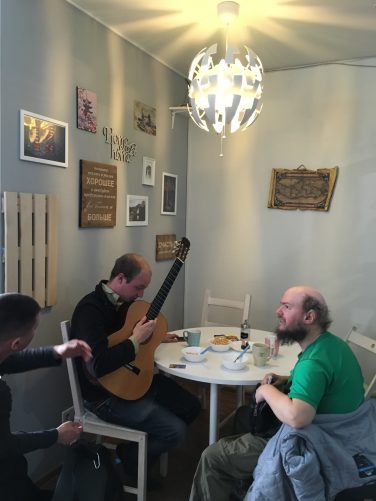 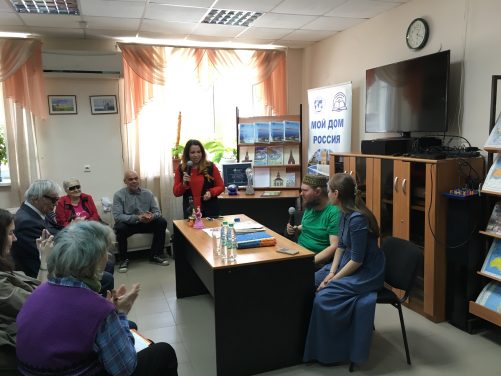 Tony sitting at a table holding a microphone talking to a group of local people, most of whom, are blind/visually impaired and/or partially deaf. A Russian woman along side also holding a microphone. She is interpreting for the audience. Tony is wearing a traditional Tatar hat. It is round and colourful. The location is the library for the blind and visually impaired. 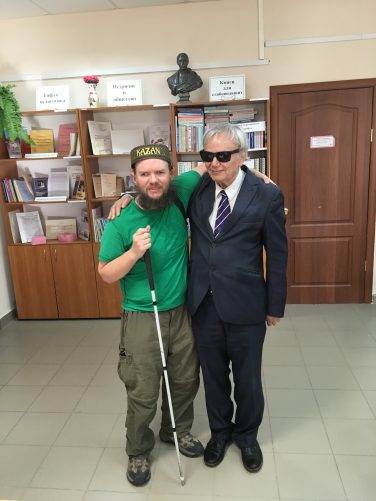 Tony and an older man standing together for the photo. The man is smartly dressed in a suit and wearing dark sunglasses. He is the director of the Library for the Blind and Visually Impaired. He is also blind. 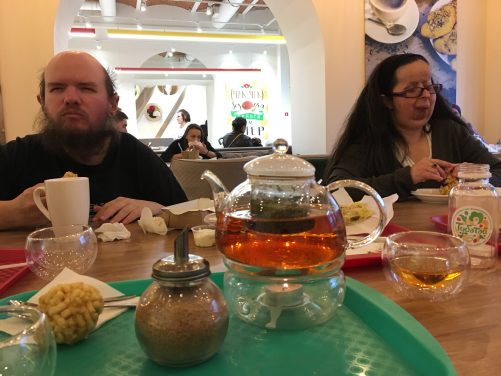 Tony and Tatiana sitting in a local café. A glass pot of tea is in the foreground. A candle is underneath to keep it warm. Tea seems to be more widely drunk than coffee in this part of Russia. 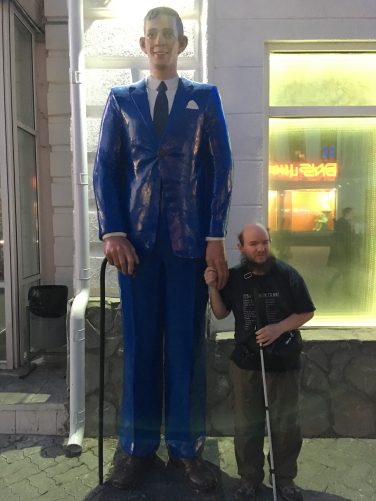 Tony standing by a statue of a very tall man in Bauman Street (Kazansky Arbat). The metal statue is more than twice Tony’s height. The man is dressed in a blue suit and holding a walking stick. 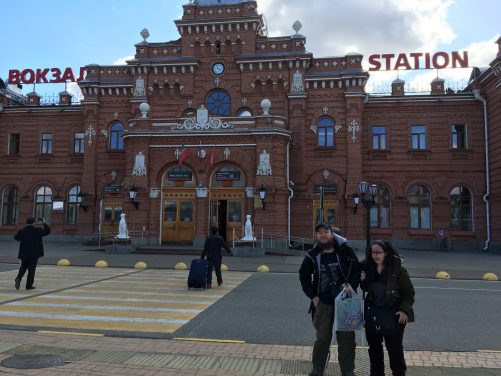 Tony and Tatiana outside Kazan Railway station. The grand main building in the background was built in 1896. 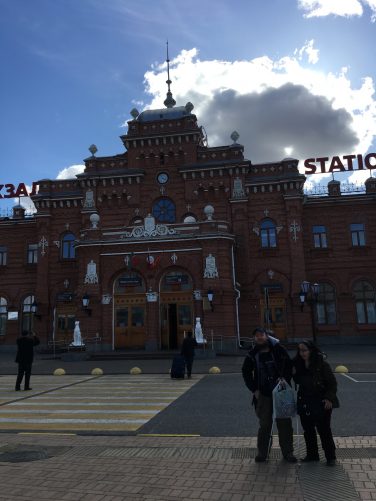 Another view of Kazan Railway station.