The Maisy Battery is a group of World War II artillery batteries constructed by the Wehrmacht near the French village of Grandcamp-Maisy in Normandy. It formed a part of Germany’s Atlantic Wall coastal fortifications and was the principal position of defence for that area. It was responsible for the defense of the sector between the Longues-sur-Mer and the St Marcouf (Crisbecq) batteries. It could target both Omaha Beach and Utah Beach. It was built in 1942 from concrete and steel and in use until 9th June 1944. It was involved in the Battle of Normandy.

British military historian Gary Sterne rediscovered Maisy Battery in January 2004 based on a map which accompanied a US Army veteran’s ‘top-secret’ by US and British officials for over 60 years, was further explored and additional fortified buildings, gun platforms, and a hospital was discovered. Over two miles of trenches were uncovered at Les Perruques, one of the 3 gun battery sites.

Maisy Battery was one of the largest German defensive positions in the Omaha sector on D-day. It had a huge role in defending the coast behind the Omaha Sector and at the edge of Utah Sector. It was first opened to the public in June 2006. More bunkers and trenches are being discovered constantly. It’s the only place of its type in Normandy. 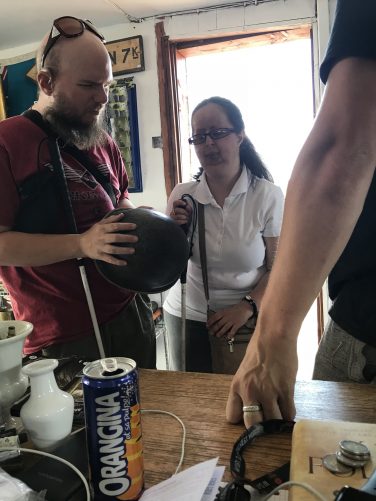 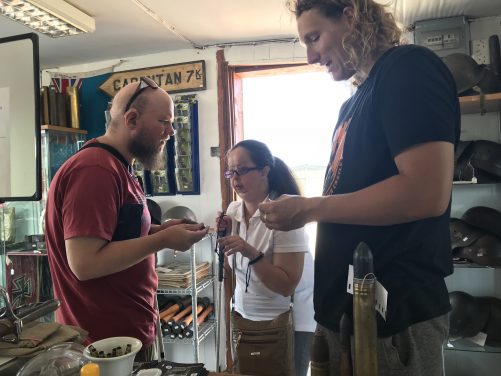 Tony with Tatiana examining a WWII bullet. The tall guy in view is named Dan Sterne, Gary’s son and collector of WWII memorabilia. He was our guide around part of the open site. Various World War II military memorabilia displayed on shelves. 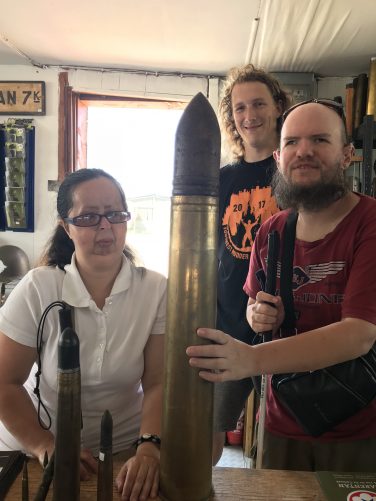 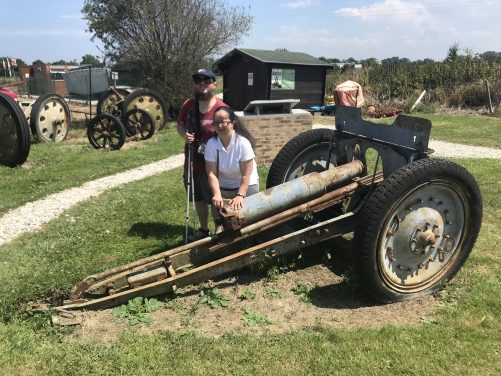 Tony and Tatiana examining the rear end of a large artillery gun. There are four artillery guns at Maisy in their original positions, as on D-Day. There were six 155mm First World War French howitzer guns originally. Along with another battery consisted of four 105mm canons, plus several guns of a smaller calibre. 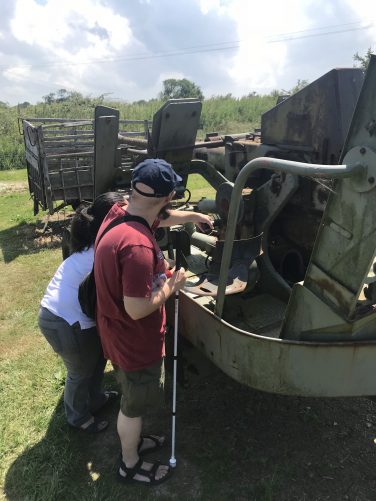 Tony and Tatiana touching a Landing Craft (LCVP). They were used by the allies on D-day to ferry men and equipment across the English Channel onto the Normandy beaches. 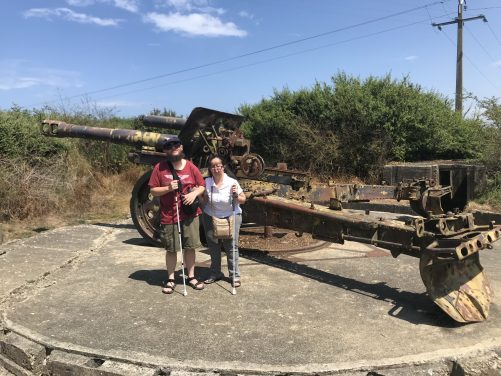 Tatiana and Tony in front of a 155mm First World War French howitzer, mounted on a circular concrete platform, allowing the gun to easily be pointed in any direction. 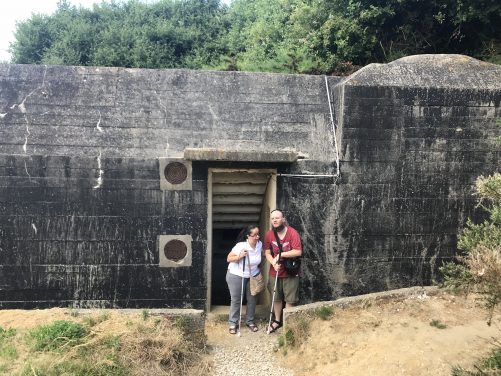 Tony and Tatiana outside the entrance to a large concrete bunker. 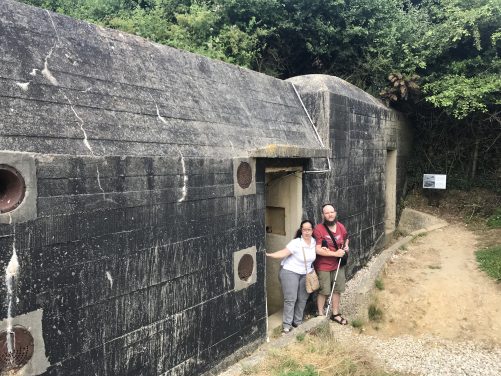 Again Tatiana and Tony outside the bunker. 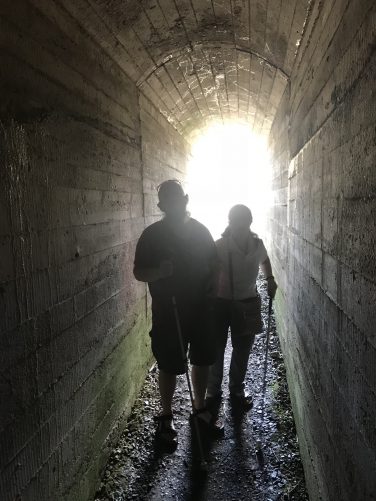 Tony and Tatiana walking along a narrow passageway with concrete walls inside one of the bunkers. Military personnel lived inside these bunkers and slept in hammocks attached to the walls. There were up to 40 men in each bunker. 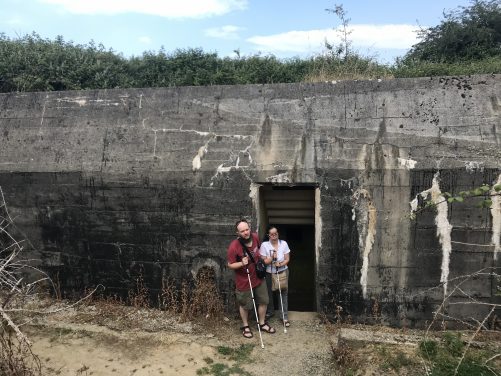 Tony and Tatiana outside another entrance to a bunker. The site was also the regional headquarters for the sector and the command post was in one of these bunkers, enforced by bomb proof concrete. 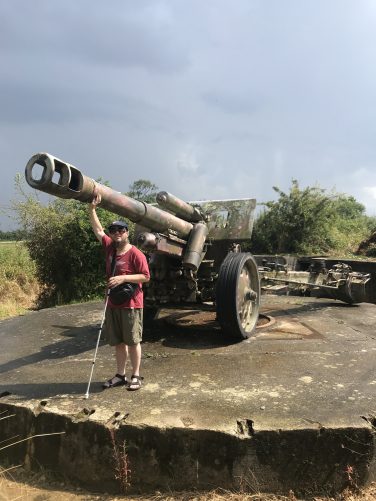 Tony touching another howitzer mounted on a circular concrete base. 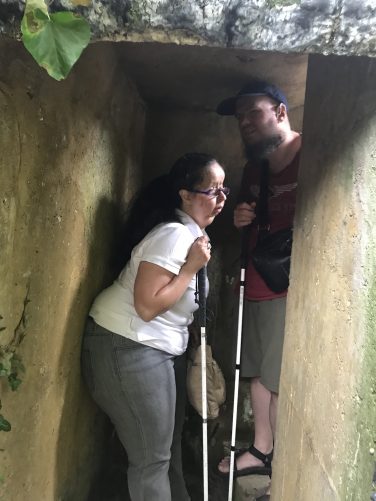 Tatiana and Tony in a short concrete passageway. This is one of the many trenches on the site. View from the entrance with a short flight of concrete steps lead up to a machine gun emplacement at the end, but they are mostly out of view. 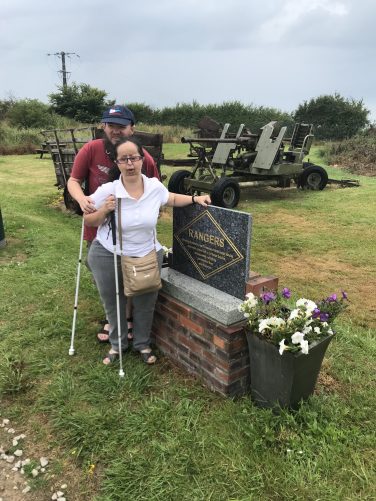 Tony and Tatiana next to a marble memorial to the 5th Rangers Battalion who captured the gun batteries at Maisy on 9th June 1944.