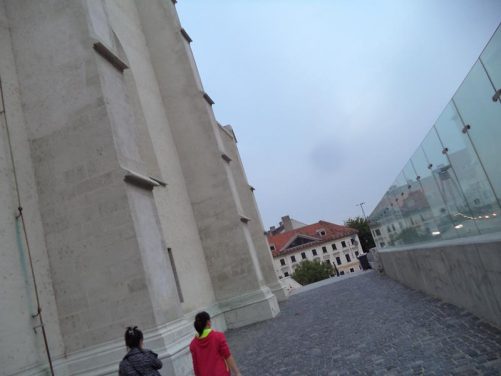 At the side of St. Martin’s Cathedral (Dóm svätého Martina), which is located on the eastern edge of Bratislava’s ‘Old Town’. Taken from the small, narrow cobbled Kapitulska Street. 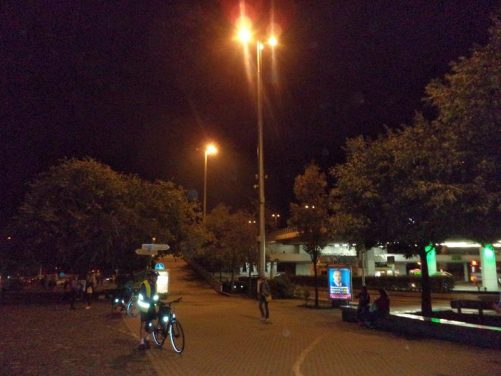 Path alongside the north end of UFO Bridge. The bridge is also called the New Bridge (Nový most) or the Bridge of the Slovak National Uprising (Most SNP). It crosses the Danube River near St. Martin’s Cathedral. It is 430 metres (1,413 ft) in length and was completed in 1972. It took Tony and his partner roughly 10 minutes to cross and find the tower’s entrance! 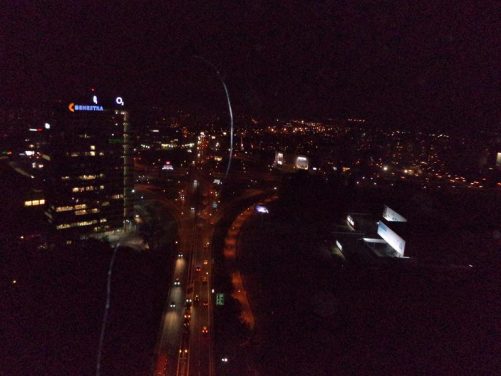 Looking south from the UFO Bridge Tower. The cityscape lit up in the evening. 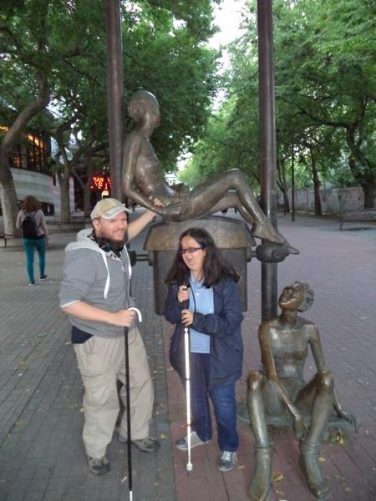 Statue of two naked girls leaning on a post box on Obchodná Ulica (Obchodná Street). The postbox is real and usable. Obchodná is mainly a pedestrian street in the city centre, containing mainly shops, cafés, bars and restaurants with trams running regularly along its length. 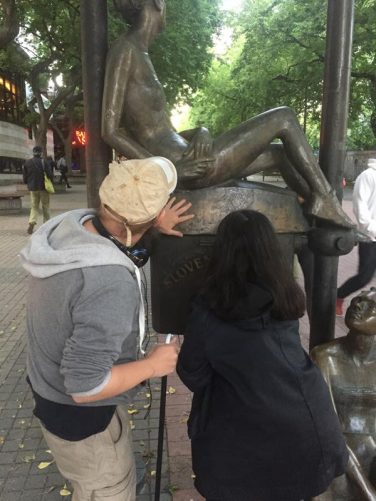 Another photo of Tony and Tatiana examining a post box with statues of two naked ladies sitting on top.

The photo above and the next eight below were taken by Viktoria. 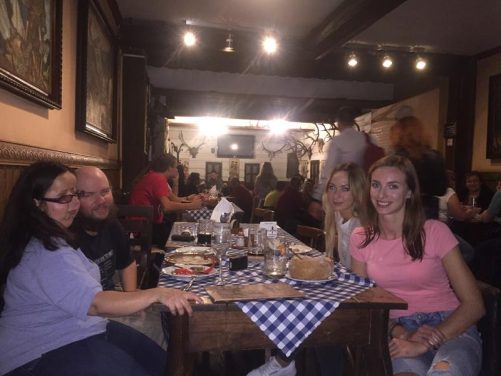 Sitting at a table in Slovak Pub. Tony with Tatiana, Viktoria and Livia. 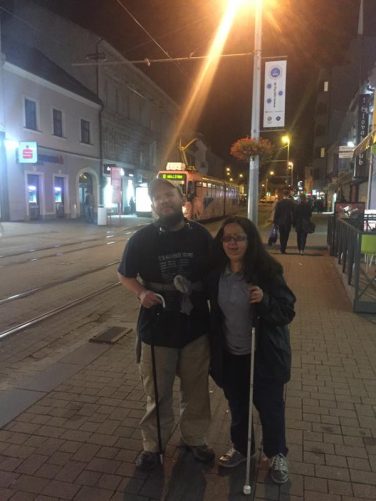 Tony and Tatiana on Obchodna street. An orange coloured tram approaching behind. 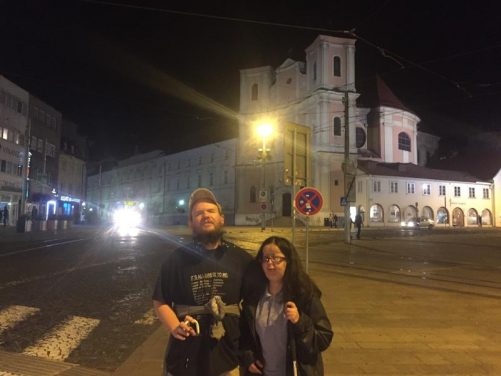 At a crossroads with a view of the Roman Catholic Trinity (Trojicka) Church behind. The church’s full name is the Church of Saint John of Matha and Saint Felix of Valois. Construction of this Baroque-style church started in 1717 by the Trinitarian Order and it was consecrated in 1727. 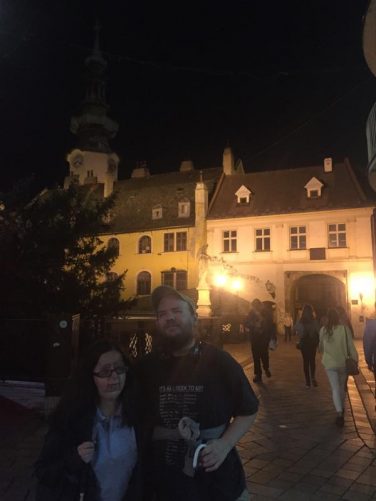 Tatiana and Tony at Michael’s Gate and tower. This is the only surviving gate of the city’s medieval fortifications. It was first built in about 1300 but was reconstructed in baroque style in 1758. 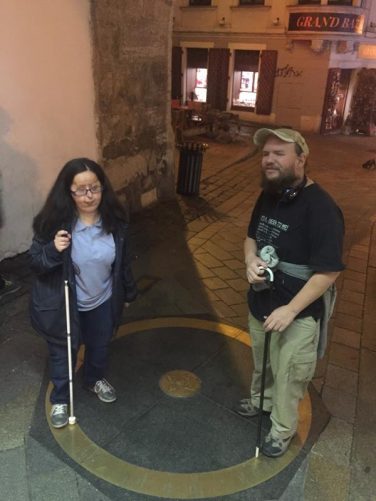 Tony and Tatiana standing on a gold compass embedded in the pavement. The distances to well-known cities are shown around the edge. Tony is standing close to the label for London and Tatiana opposite. 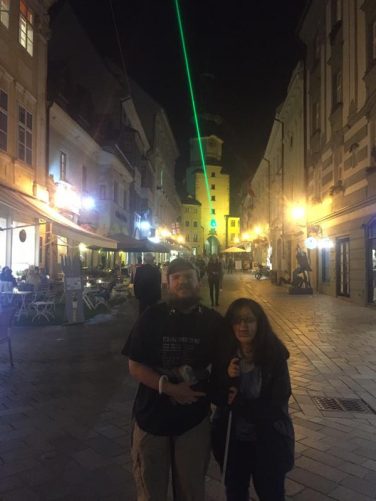 Tony and Tatiana with the tower of Michael’s Gate behind. 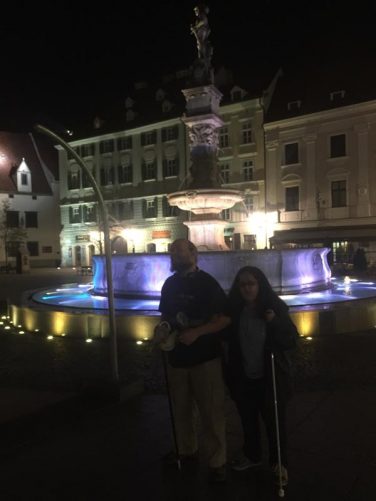 Next to the Roland Fountain in the Main Square (Hlavné námestie). The fountain’s construction began in 1572 under the orders of Maximilian II, the king of Royal Hungary, to provide a public water supply. The fountain is topped by a statue of Maximilian dressed in full armour. It hasbeen modified and rebuilt several times. 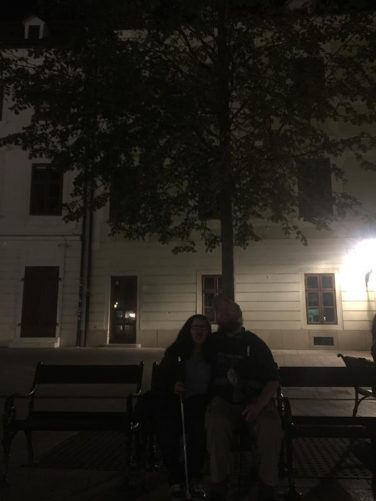 Tatiana and Tony sitting on a bench under the tree in semi-darkness. Here Tony and Tatiana said goodbye to Viktoria.