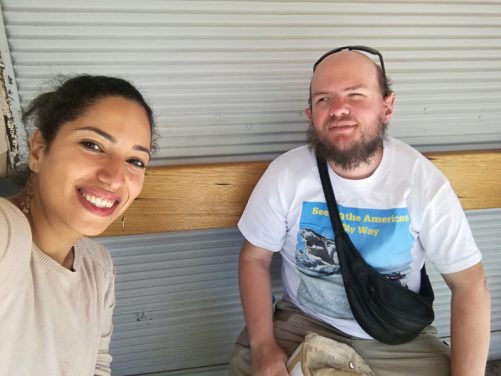 Tony with friend Hebatalah at Rumi Cafe in the Jabal Al Weibdeh area of central Amman. 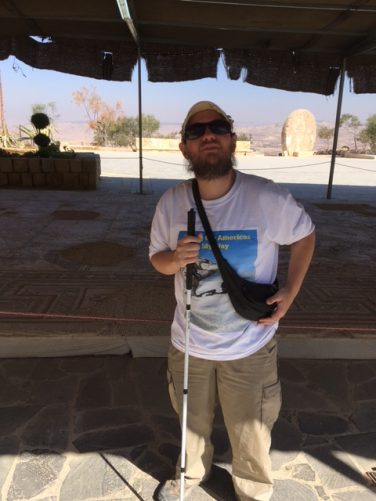 Tony under a sun shelter at Mount Nebo. Mount Nebo is believed to be the site where Moses saw the Holy Land and according to Christian tradition is buried. It stands on an elevated ridge approximately 817 metres above sea level. The site provides a panorama of the Holy Land with Jerusalem visible on a very clear day. 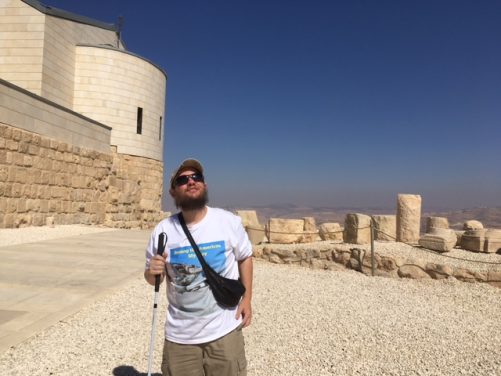 Outside the Moses Memorial Church at Mount Nebo. The church is modern but was built on the site of a Byzantine church and monastery. Today the church is part of a functioning Franciscan monastery. 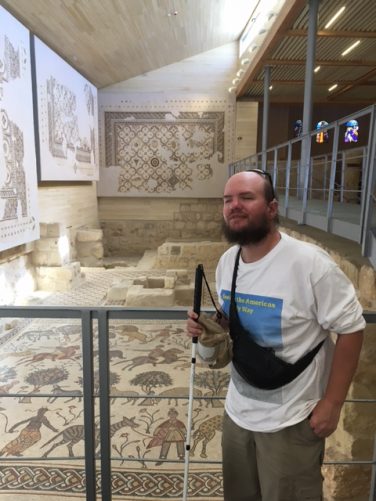 Tony in a room containing Byzantine mosaics at Mount Nebo. 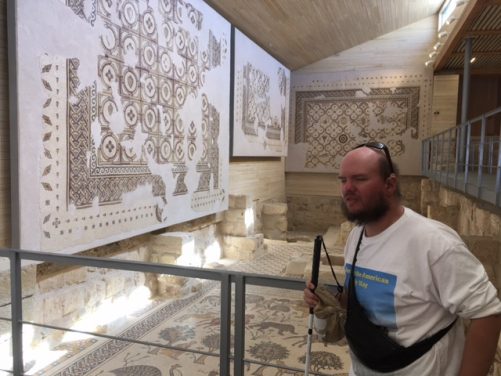 Mosaics made up of geometric patterns mounted on the wall. 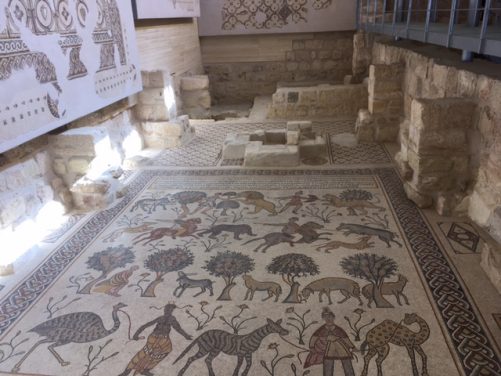 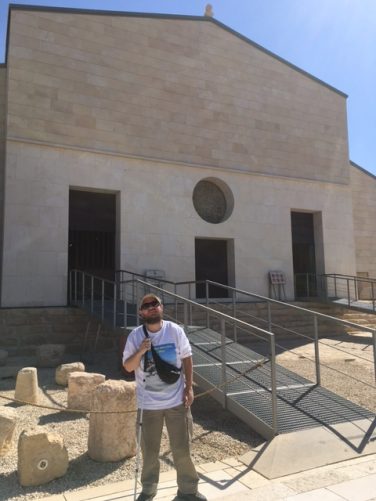 Tony outside the building housing the mosaics. 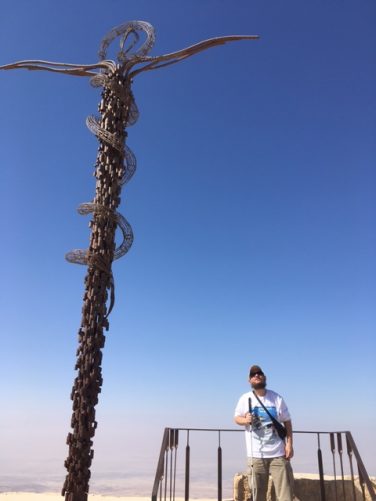 Tony on a viewing platform with the Brazen Serpent sculpture standing along side. The sculpture symbolises the bronze serpent taken by Moses into the desert and the cross upon which Jesus was crucified. 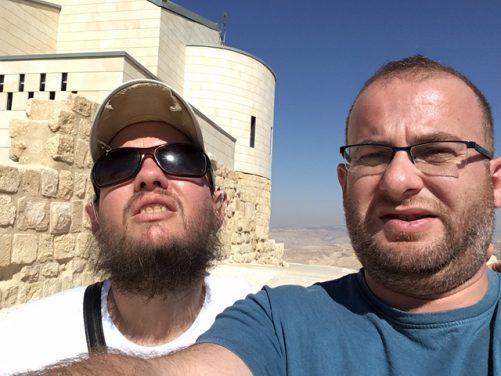 Tony with his couch surfing host Ashraf at Mount Nebo. 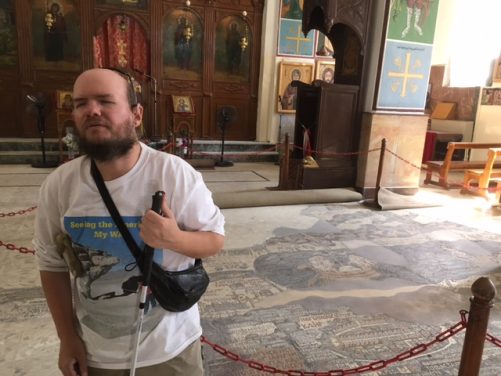 Tony in front of the Madaba Map, a 6th century mosaic map of the Holy Land, located inside the 19th-century Greek Orthodox St George Church. Originally the map was made up of around two million tiles, roughly one-third of it survives today. It includes the oldest surviving original cartographic depiction of the Holy Land and especially Jerusalem. The present building stands on the remains on a early Christian Byzantine church. 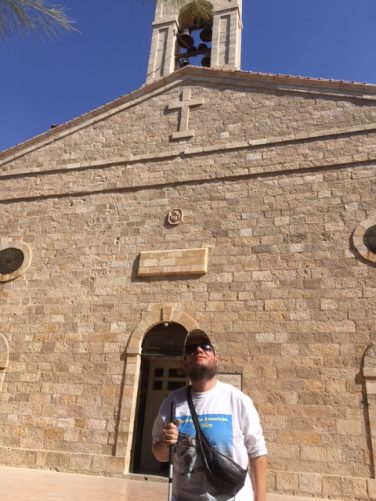 Jerash was formerly the Roman city of Gerasa. Today the well-preserved remains of the ancient city stand alongside the modern town. Jerash is located 30 miles (48 km) north of Jordan’s capital Amman. 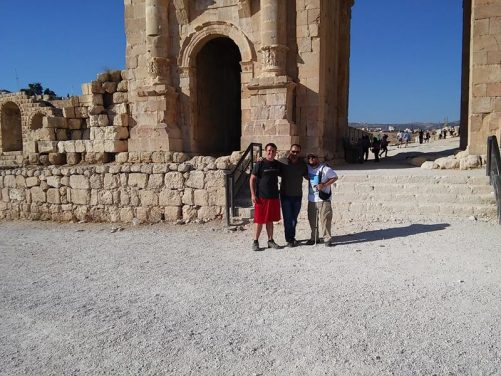 Tony with Brent Folan and a friend of Faris’s at the Arch of Hadrian. Brent later interviewed Tony for the InspireMore blog. Brent is from Texas, USA. Brent and Tony met in a hostel in Wadi Musa (Petra), southern Jordan and travelled together to Amman and went onto Jerash with Brent’s couch surfer, Faris. 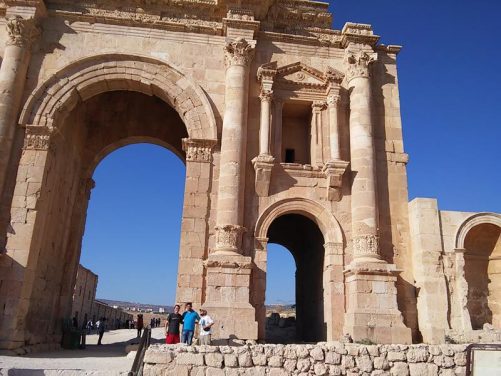 Looking through the central arch. Hadrian’s Arch is an 11-metre high triple-arched gateway erected to honour the visit of Roman Emperor Hadrian to the city (then called Gerasa) in the winter of 129–130 AD. Tony is standing with Faris and Brent. 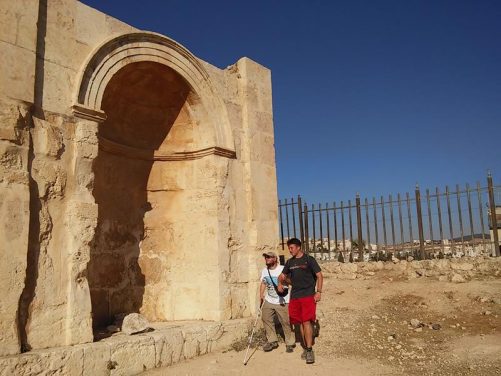 Tony and Brent next to a large alcove built to one side of Hadrian’s Arch. 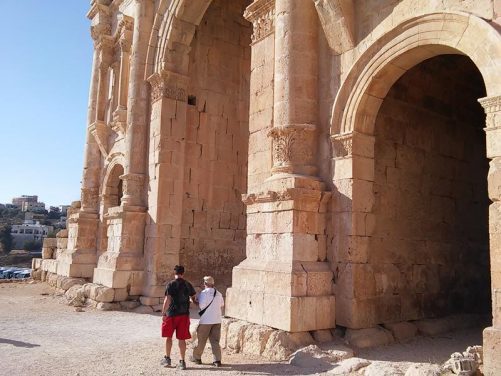 Tony and Brent walking in front of Hadrian’s Arch.

Looking up at Hadrian’s Arch from below. Tony and Brent in front. 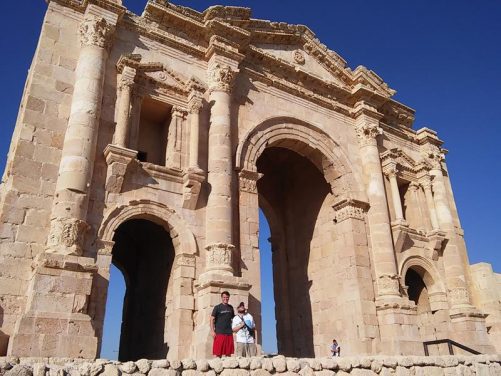 Again Hadrian’s Arch. Looking up from one of the smaller side arches to an alcove above. Elaborate carving at the top. 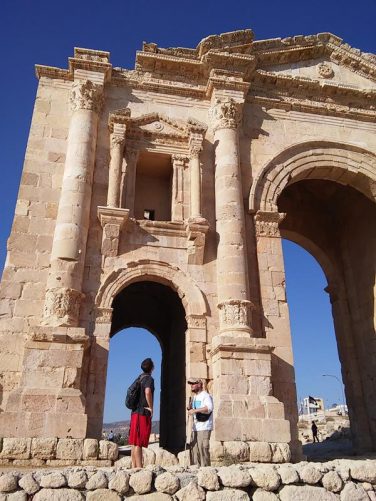 Tony and Brent next to a stone wall incorporating a number of doorways. These were entrances to shops in the east wall of the hippodrome. The wall runs alongside the road north of Hadrian’s Arch towards the centre of ancient city. 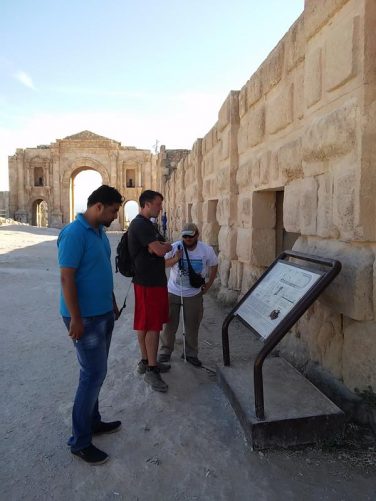 Tony next to an information board. A passageway into the hippodrome is just visible to the right. The Hippodrome was once used for chariot races and other sports. It is 244 metres long and once had seating for 15,000 spectators. 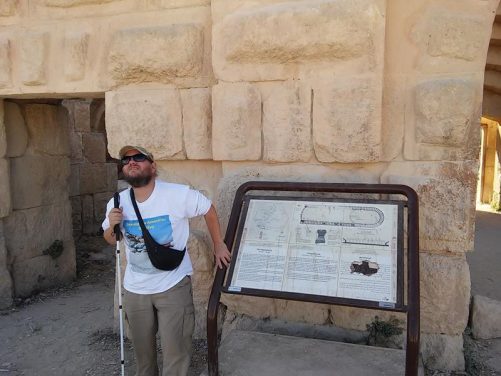 Tony on the route running north from the hippodrome towards the South Gate. 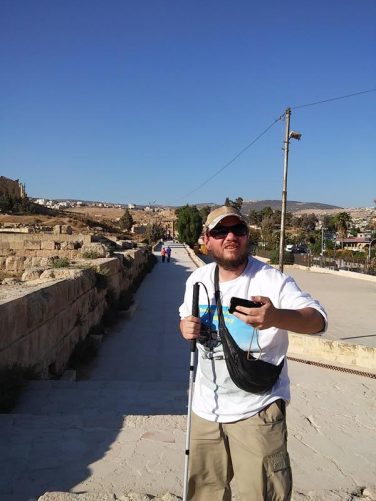 Tony at the South Gate. This reconstructed triple-arched gateway was once the principal entrance into the city. 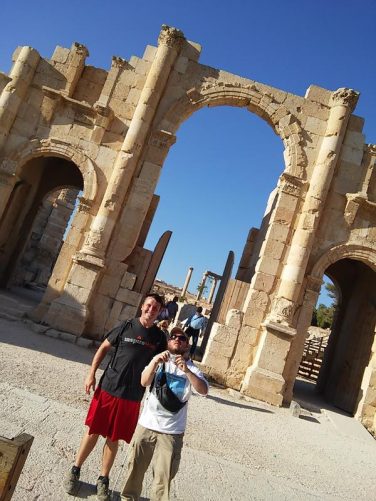 Brent and Tony in front of the South Gate’s central arch. 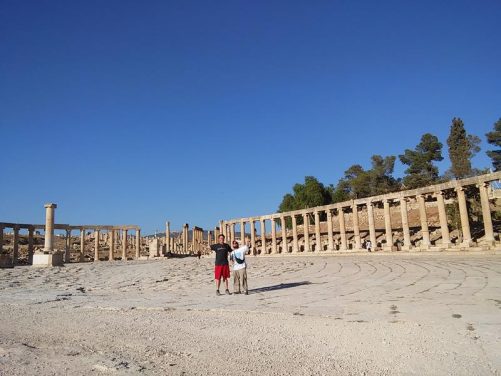 Tony and Brent in the Forum (Oval Plaza). The Forum is an irregular oval shape, roughly 80 metres by 90 metres (262 feet by 295 feet), with 160 Ionic columns in two curving colonnades at the edge. 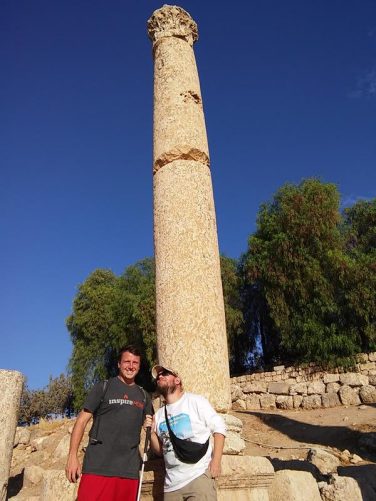 Brent and Tony in front of a stone column. 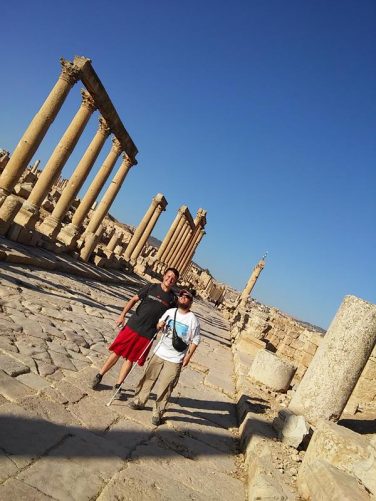 A view along the Cardo, which is the ancient city’s colonnaded central street. It runs straight for 600 metres (660 yards) in a north-east direction from the Forum. A complex drainage system lies below the stone paving. 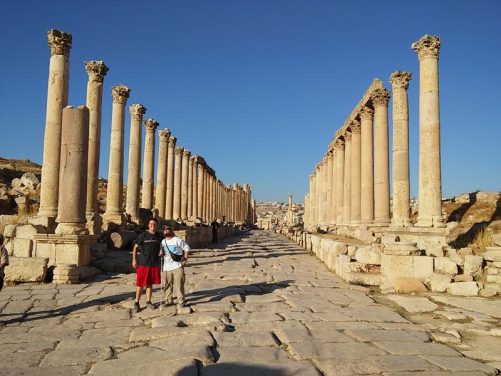 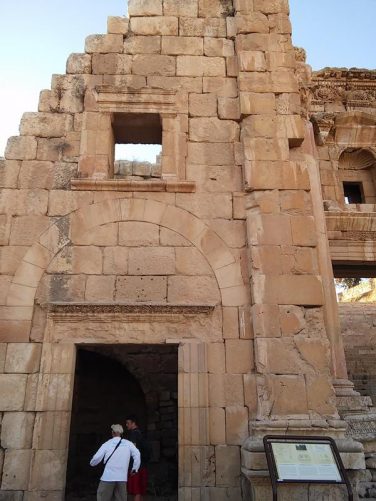 Tony in a doorway at the side of the Propylaeum at the Temple of Artemis. The Propylaeum is a massive monumental gateway, which was dedicated in 150 AD. It is at the bottom of steps leading up to the temple itself. 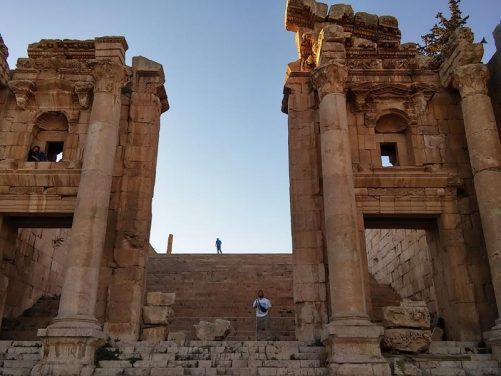 Tony in the central gate of the Propylaeum with a long wide flight of steps up to the Temple of Artemis behind. 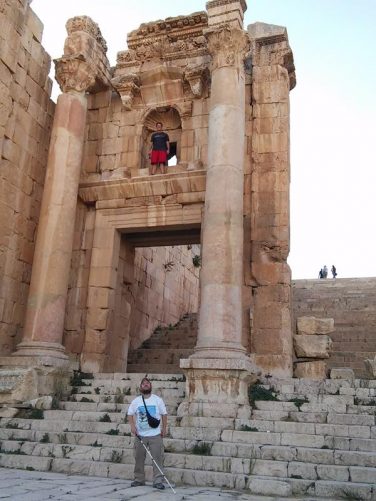 Tony in front of a doorway at the side of the Propylaeum. Brent standing in an alcove up above the doorway.